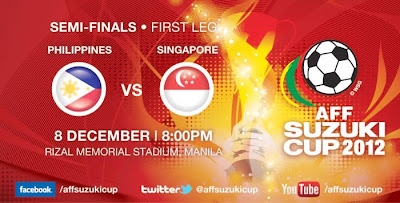 Despite their two recent losses in friendly matches with the Philippines, Singapore national coach Radojko Avramovic said on Friday they do not intend to leave Manila without a win when the teams clash in the first leg of their AFF Suzuki Cup semi-final on Saturday at the Rizal Memorial Stadium.

“It’s in our hands to let them (the Philippines) wait another two years to dream,” Avramovic said at the pre-match press conference. “It’s good we are in the semi-finals but our target is reaching the finals.”

He added that it would be wrong for the Philippines to underestimate the Lions.

“Singapore are two-time winners of this competition (under my watch) and not an ‘itsy-bitsy’ team,” added the 63-year-old Serbian, who took over the helm of the Lions in 2003 and steered them to titles in 2004 and 2007. Singapore also won the Asean crown in 1998.

Philippine team manager Dan Palami said in response that the Azkals were in charge of their own destiny.

“Singapore has had a good run. And with full respect to Singapore, the Philippines intends to write their own history and we will have the result that we want,” he said. “We hope to get full points in this particular game.

“We know that Singapore are in familiar territory, they have been here several times already and certainly the Philippines will not be complacent in that quest, in that dream that has been elusive so far in (reaching the final).”