Home ARTIKEL TERKINI ULASAN Its not what more the Chinese want, but its what the Malay wants all along

Its not what more the Chinese want, but its what the Malay wants all along 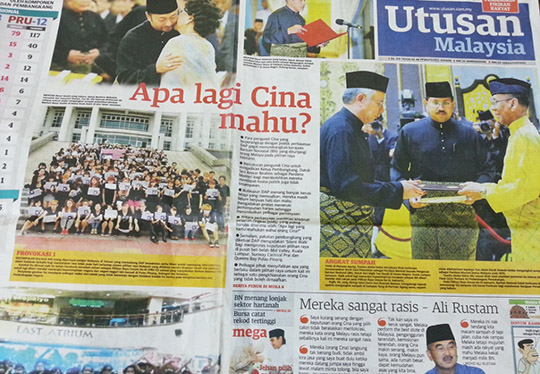 Utusan got the wrong end of the stick by posting the wrong question and gave the racist opposition an edge. Too much time has already been wasted upon thinking of what the Chinese want. It is not what more the Chinese want, in fact its what the Malay wants all along.

Look at what happened in Johor, BN stronghold that we thought to be no room for racism, when BN fielded Ghani and PR fielded Kit Siang, Malay vs Chinese in a Chinese territory, Gelang Patah vote for Chinese. This shows the Chinese preferred their own kind, by that, why can't the Malays?

Despite the claim of being racist, since independent UMNO has been giving their Malay majority territories to the MCA and not to mention the MIC, in the spirit of give and take (kongsi) as Tun M said.

However, post GE13, Its time for UMNO to re-think and start recalling their constituency lent to others in the past and give it back to their rightful owner, the Malay.

Same goes to Penang, despite being called racist, UMNO has been the majority in Penang as old as Penang is yet the CM post has always been given to the Chinese, and that made the Penangite unhappy thus they vote for the opposition. Think about it, it couldn't be a better time to give back the CM post to its rightful majority.

As a conclusion if the Chinese doesn't want to be represented by the Malay so does the Malays. This is not racist, this is what just happened 3 days ago, its a fact, a reality and the truth.

And there is a thought by doing so, BN would lose the Chinese support. As a matter of fact, BN already did fool.