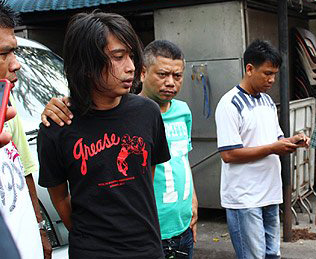 PR has been criticized for abandoning bodohsiswa Adam Adli in his time of need.

Even the whore in Musthapa Ali "looked alike" clip get paid after used but who is Adam Adli compared to a whore in the eyes of PR?

After an in depth look at the situation it is evidently found out why, Adam Adli is no Chinese that is why he's been abandoned like used condom.

Miss Ong a part-time model whose been cuffed by the police for humiliating Malaysia by stepping on the PM's photo got DAP's Lim Guan Eng profoundly attention which later on issued a provocative statement that UMNO no longer needed the Chinese vote for doing so, clearly Lim Guan Eng was playing the race card that he purportedly "hated so much" ---if used by others.

Least we forget, at the same time of Miss Ong apprehension there was another bodohsiswa named Ammar who committed the same crime and suffered the same fate but got no attention from any PR leader.

These clearly shows that racial polarization flourished prosperously in PR when the Malays, Bumis and Indian scream they walk when the Chinese squeak they gallop.